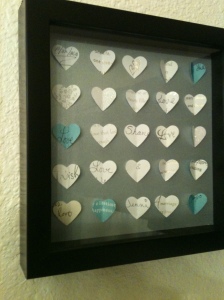 October 22, 2012 marks my second wedding anniversary. I’ve been feeling a little guilty about not doing anything to celebrate our first anniversary; we had our baby shower for Molly instead. So this year I have decided to create a project for each anniversary. The first year is paper; with that in mind and a little  bit of Pinterest surfing for some ideas I came up with this project. I had saved the handful of cards we received from our wedding and used a heart punch to cut out all the “best” parts of the cards (both handwritten parts, and printed wording). I purchased a small square shadow box frame from Michael’s and cut a piece of scrapbook paper to fit. I played around with a layout for the hearts that I liked and then folded each in half so they would stick out from the paper (like a butterfly would). Then I took Elmer’s school glue and glued just the “spine” of each heart to the paper. I’ll admit I was pretty meticulous about the hearts being evenly spaced and level so I lightly penciled a measured grid on my paper beforehand. Once everything was glued in place and relatively dry I erased the visible pencil lines. 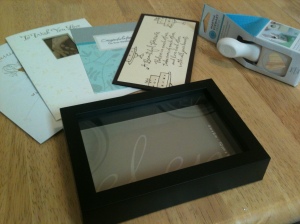 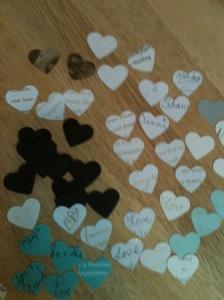 I love the way it turned out. It was a quick easy project and is a fun keepsake for those old cards. Now to get started on our year two project, cotton. I’m thinking custom pillowcases for the bed….